Which Refrigerant Is Used in Domestic Refrigerator?

Have you been wondering which refrigerant is used in your fridge? Well, just read our post and you would know all about it. 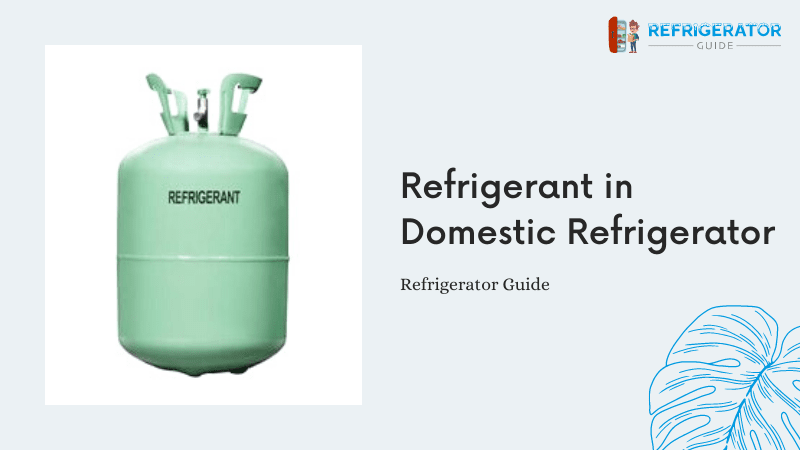 Since we are all about refrigerators, we thought why not enlighten our readers with some technical knowledge. We are sure you all might be aware of the CFC menace and how refrigerants used in AC and fridges are helping aggravate global warming and hence killing our planets.

One might wonder if the refrigerants are so harmful then why brands are not doing something about it. The truth is that they are doing a lot. In fact, you would find it surprising that there have been close to 6 changes in the type of refrigerants that the domestic refrigerators now use.

One thing that we would mention here is that no matter which refrigerant in domestic refrigerator is used, we should be responsible with them. Presently all of them are polluting nature and our little awareness can help mother nature heal.

What Type of Refrigerant Is Used in Refrigerators?

To answer this question, we will start from the very beginning. For our present contextual purpose, this lesson in refrigerant history will begin from five decades back.

Initially, when the refrigerators began selling commercially sulphur-based, sulfur di-oxide refrigerant was used. However, it was soon found to be pretty damning and this particular refrigerator was banned 50 years ago.

Then came the era of methyl chloride, which too lasted for just 10 years and it has been 40 years since it has been banned too. R-12 became the refrigerant of choice and was very widely used in everything from your car air-conditioning to refrigerators. It was cheap to produce, safe to handle, and commercially cheap to produce.

The problem with R-12 however was - that it was very polluting. The amount of CFCs that it produced sent chills down the environmental scientist’s spines. It was the most prolifically produced and used refrigerant in domestic refrigerator to date. In fact, if you have an old refrigerator in your home then chances are that it’s still running on an R-12 refrigerant.

R-12 production has not stopped yet however none of the present refrigerator models use it. It’s just been produced to fulfil the needs of the older models of refrigerators.

The issue with refrigerants is that retrofitting, and upgrades are quite expensive, and a slight error can have lethal consequences. That’s why people prefer either discarding their old fridges or arranging for the same make of refrigerant.

Officially R-12 has been phased out years ago and now fridges in India typically use a new type of refrigerant called R-134a, this is also being phased out but in parts. It’s way better than R-12 and is cheaper to produce and safer to discard.

It’s also minimally polluting. Both R-12 and R-13 - are hydro fluorocarbon-based refrigerants. Their era is also ending and now in 2021, a new type of refrigerant is paving its way, it’s called the R-600.

R-600 is already an established refrigerant in the European and American markets. It will be here in India soon. R-600 is a hydrocarbon-based refrigerant that does not cause any global warming whatsoever.

Since it’s a hydrocarbon no CFC is released and it’s environmentally very stable and safe. It’s going to be the future of refrigerant in domestic refrigerators of India.

Which Refrigerant Is Used in Domestic Refrigerator?

Now since you know the past and present of the refrigerants, we will answer this question very directly. Presently, the most commonly used refrigerant in Indian markets is R-134a which might be soon phased out and replaced by R-600.

Can We Do Without Refrigerants?

No, we cannot, - and we should not. Refrigerants are the lifeline of our cooling systems. From our domestic refrigerators to big climate control systems - all run on them. Taking them out of the picture is not a solution.

All we have to do is minimize their use and use our appliances responsibly. Truth be told refrigerants are just the big-league culprits of the global warming fiasco, it’s the climate control systems and commercial refrigeration units. They produce tonnes of greenhouse gases that are typically bad for the ozone layer.

Time is now ripe to act responsibly, according to some reports the global COVID-19 lockdown had an upside. Just because of the lockdown the ozone layer is reportedly completely repaired. If that’s the truth, then now it’s time to act wisely and keep things that way. Global warming is a serious issue that needs everyone’s active intervention. Let’s help the planet heal and stay cool while doing so.

Hope you liked our post. Do follow us for more such posts in the future. Feel free to write to us if you want to know more about global warming and the role of refrigerants in promoting it. We will provide you with all the information that we can dig out from the internet.

Best Side by Side Refrigerators in India